Humpty Dumpty
Originally uploaded by PhylB
Today I crawled up the fence and decided to sit on the top. You get so much better a view of the main road from up there. I hope Mum and Dad didn't notice I sneaked up there!
Posted by Phyl at 22:50 No comments:

Christ, Now they're trying to get me Squiffy !

Mum & Dad threw a little party the other night ,,,

They invited Granny & Pumpa down for drinkies & a nice meal.

Daddy was Chef for the night with his funny chef's outfit on and Mummy was waitress/hostess, pouring and mixing drinkies for everyone.

First it's the plastic thing in my mouth with something they call food on it ,,
Now it's "Get Squiify" time ,,, whatever next ?
I can hardly wait !! 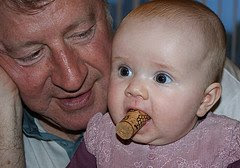 PS : This vino stuff is quite nice, hic !

Posted by The Scudder at 12:07 No comments: Links to this post food?
Originally uploaded by PhylB
Dad keeps sticking a piece of plastic in my mouth with some thick, funny-tasting milk on it. He started it about 3 days ago and at first I cried because I didn't know what it was but now I think it is quite fun - as long as he only gives me 3 or 4 spoonfuls a day.
Posted by Phyl at 00:12 No comments: Anna and friends
Originally uploaded by viralbus
In Denmark, mum and dad took me round to meet other kids my own age.
Thursday, we went to visit Lisbeth, who is the daughter of dad's old friend Marianne and a nice guy called Stefan. Marianne and dad thought we should one day both become members of something called the BEST in TÅGEKAMMERET. I wonder what that is, but it sounds like fun. Lisbeth was good fun to play with, and I think she was smaller than me even though she is a lot (six weeks!) older.
Two days later, we went for brunch with my big second cousin Karl (his mum, Elisabeth, is dad's cousin; his dad is called Peter). Although he's only two months older than me, he's much bigger and is already eating real food. He was really nice, though. Perhaps he'll take me out dancing one day.
Later that day, we went round to another of dad's cousins, Henrik, and his wife Ulla. At first I thought they had no kids, but that was because they were sleeping in the garden. It turned out they had a daughter six days younger than me, so I'm not the youngest in the family! She's called Olivia, and I think she'll be good fun, but we had to leave just after she woke up. She also has a big sister, but given that she's five times older than me, I don't know whether we'll ever be able to play together.
Posted by Thomas Widmann at 22:10 No comments:

Boy is travelling fun. Aeroplanes are ever so interesting. And trains are cool too, though both are mostly good for sleeping on.
Posted by Phyl at 15:46 No comments: Links to this post Plane landing against the Manhattan skyline
Originally uploaded by John Wardell (Netinho)
Mummy says she's going to take me on 2 aeroplanes today. I have never seen an aeroplane before. I wonder what that is. I am going to a country called Holland and after that I am going to Denmark to visit my Auntie Miriam, and later in the week my grandparents. I bet that'll be fun. Mummy can take photos of me with Ursula again. I wish Pudge could come too but he has had to go spend a few days with Papa. I've never met Papa, but Pudge goes there for the weekend twice a month and seems to like it.
Posted by Phyl at 11:07 No comments:

We love each other!